Surrey Fire & Rescue Service wanted a more up to date animation to replace the short ‘Francis the Firefly’ which they used to teach children about the dangers of playing with matches and lighters. It was made back in the 1990s and featured the voice talents of the wonderful Richard Briers.
Working in conjunction with both LEO and SFRS we produced a script called ‘Hunt the Floof’ that told the tale of two little monsters, a brother and sister called Farley & Marrow, who learn about the dangers of playing with lighters and matches during one of their imaginative adventures around the house.
Feeling we needed another worthy narrator with the warmth and celebrity status of Briers, I managed to persuade Hugh Bonnneville to provide our voice over. 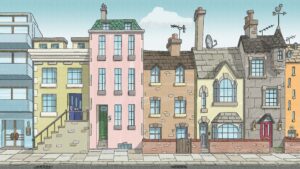 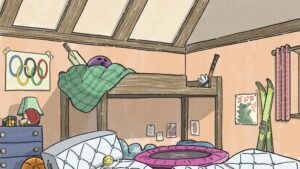 I was then tasked solely with producing the whole film myself – designing the characters, storyboarding, backgrounds and animating. All the assets were created in Photoshop and the film produced in Animate. Brigitte Sutherland over at LEO gave it the After Effects polish and added the SFX.

It was a Herculean task – but we got there in the end! I am very proud of the final short and what we achieved considering the time constraints and limited budget. I hope the kids find it as fun, engaging and educational as the original.